Our experts will reply you very soon.

How Does A Temperature Gauge Work? 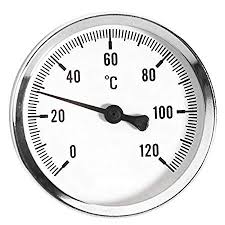 There are three types of temperatures that interest a motorist, including the water in the cooling system, the engine lubricating oil and also the outside air. As the automobile manufacturers enhanced the dashboards of the car from the Speedo gauge to rudimentary gauge, they used two types of gauge instead, one is mechanical and the other is electrical.

The mechanical gauge has a sensing element that is a metal bulb that has a liquid with low freezing point and a high coefficient of expansion. It is connected directly to with capillary tube directly to bourbon tube and diaphragm.

When heated, the fluid expands, and the gauge pointer inside the scale moves across the short scale. An amplifying mechanical linkage can be included with the instrument case so that the longer and circular scale can be employed. The electrical gauge used in the thermistor bead is mounted with the metal bulb as the transmitter or sensing element.

Thermometer mounted on the most visible place on the radiator cap is one of the earliest types of the water temperature gauge. A later type that is suitable for both water and soil temperature measurement employs a bimetal strip device that is enclosed within the heating coil for both the transmitter and dashboard indicator.

When the engine is first switched on, the battery alone heats the coil, which means the vehicle’s battery coil and that the battery current is soaring. The indicator metal strip heats up and the pointer lives to is attached to its cold position. As the engine starts, the oil or the water has its own heating effect on the bimetal transmitter strip so that the current is drawn less from the battery.

The most important temperature that it is to be known is the cooling system water. However, accurate measurement is not required, calibration is not more than the ‘cold’ rising to ‘hot’ with the normal temperature opting to 80 to 85 degrees Celsius, somewhere between the two given temperatures.

The sensing element is placed in the thermostat housing or on the top of the cylinder block. It is essential for the driver to know of any high-temperature water. Most of the water-cooled vehicle is fitted with the cooling system gauge.


Boiling temperature or weather, especially in the start-stop traffic, can produce high gauge reading, which will go down once the conditions become normal, and it is cold again.

The temperature gauge is a wry essential thing that needs to be installed in the automobiles, which is why temperature gauge manufacturer India is increasing. Before one install it should be knowing how it works and its uses.

This entry was posted on May, 18, 2020 at 11 : 39 am and is filed under Temperature Gauges. You can follow any responses to this entry through the RSS 2.0 feed. You can leave a response from your own site.